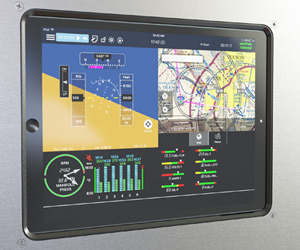 When was the last time you saw a full-featured, installed multifunction display system for a certified General Aviation aircraft for less than $1000? When was the last time you interacted with your display by voice? If your answers for both of those questions was “I haven’t” – then you need to read on!
Guardian Avionics of Tucson, AZ is pleased to unveil the new smartPlane system and line of products and applications – an FAA approved iPad-based Multifunction display and flight data recorder system with voice command capability. The smartPlane system was designed to give owners a budget-friendly multifunction display option for their panel while collecting, storing, and displaying valuable long-term flight and performance data in an easy to use format online to help improve efficiency and reduce costs for the General Aviation aircraft owner.
The smartPlane system allows users to connect select EFIS, GPS, and Engine Monitor products to four new smartLink products from Guardian Avionics (smartLink 554, smartLink 555, smartLink 650, and smartLink 851), which collect and transmit to the smartMFD iOS application by USB or Bluetooth. The smartMFD application displays moving map and Electronic Flight Bag (EFB) functions along with a large engine monitor screen while recording all data behind the scenes. It can even be controlled on the iPad by voice commands similar to the popular “Siri”. When the flight is complete, the data is uploaded to the smartCloud web application where it can be reviewed and shared with others, such as mechanics and manufacturers. Other value-added features include Carbon Monoxide detection, Real-time Aircraft Tracking, Pilot Logbook, Aircraft Flight Logs, and Discrepancy Reports (squawk list).
“Pilots of certified aircraft have been using their iPads in the cockpit to replace kneeboards and charts for some time now… and smartPlane is the first step to allow the iPad to replace or supplement MFD displays IN the panel” said Ash Vij, President of Guardian Avionics. “This is the kind of progress that helps bring the cost of aircraft ownership down for aircraft owners.”
All products in the smartPlane product line are built on the Carbon Monoxide (CO) poisoning prevention technology that Guardian Avionics has been known for. The smartLink 554, smartLink 555, smartLink 650, and smartLink 851 all include the highly sensitive electrochemical CO detection sensors as installed as standard safety equipment in all new single engine aircraft from Cessna, Cirrus, Piper, and Diamond.
In addition to the announcement of the new smartPlane products and applications, Guardian Avionics is also rebranding their line of popular iPad and iPhone instrument panel flush mounts as smartPanel Mounts and USB power supplies as smartPower under the smartPlane line to mount and power the iPad focused system inside instrument panels.
Best of all, the FAA has approved the smartPlane product line for installation in FAA Certified Part 23 aircraft under the NORSEE (Non-Required Safety Enhancing Equipment) authorization. It requires only a minor alteration logbook entry by the installing A&P mechanic – no costly STC or field approvals needed. All products in the smartPanel and smartPower line were previously NORSEE authorized. Guardian Avionics was the first company granted NORSEE authorization when the program launched in the summer of 2016.
Guardian Avionics is offering a special at EAA AirVenture where customers may preorder the smartLink 851 system with flight data, AHRS, USB power, and CO detection and will get a smartPanel iPad Mini or iPad Air / Pro 9.7” mount with the package. A full multifunction display package for $899.
See the smartLink 851 Multifunction Display Package for Under $1000 at This Link.
For more information on the smartPlane System, please visit www.GuardianAvionics.com/smartPlane or visit Guardian Avionics at EAA AirVenture Oshkosh in the Epic Aviation C Hangar, booth C-3143.
About Guardian Avionics
Based in Tucson, Arizona and established in 1999, Guardian Avionics / CO Guardian is a leading provider of Carbon Monoxide detectors, iPad/iPhone panel mounts, USB power supplies, and connected cockpit solutions for General Aviation ranging from portable units to FAA TSO certified models. For more information, please visit www.GuardianAvionics.com or contact by phone at 520-889-1177.
MFD 851
Your Price: $1,499.00
Quick View